Hello Dear Friends,
I want to thank you for coming to my 14th gotcha party last week. You really made my day special! 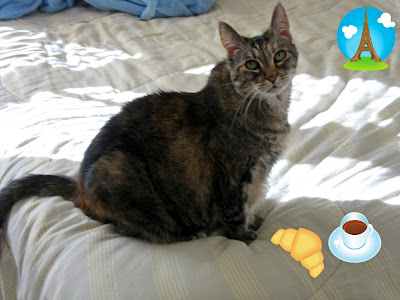 I've missed you all. Mama has been busier than usual, and she's getting ready to go on a vacation for a couple of weeks in Europe.  Simba and I will stay home.  The cat sitter will be coming by daily to feed us.  The cat sitter will also be trying to murder me.  That’s why I’ll be under the bed.  It’s better to be safe than sorry.
I’m sad that I’ll miss Halloween, but at least I’ll miss the humiliation of being squeezed into a costume like last year.  I heard Papa say it was like stuffing a sausage into a tutu.
We will still visit until it's time for Mama to leave, but we may not get to post again until her return.
Headtaps,
Lucy
xxxooo
Posted by Annie Bear at 6:34 AM 29 comments: 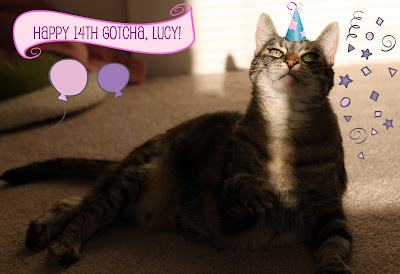 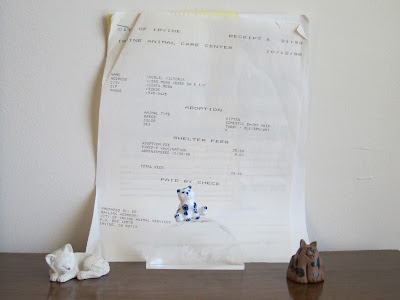 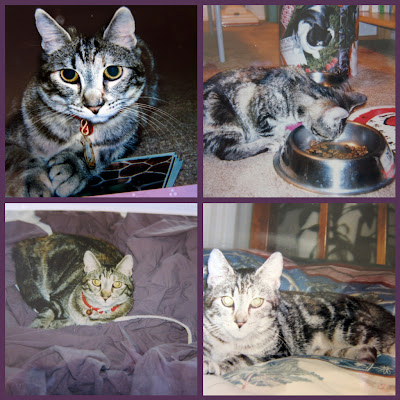 In the fall of 1996, I decided I wanted a third kitty.  We had two male middle-aged cats at the time.  I figured I needed a female kitten to ensure the least amount of problems with introducing a new cat.  On my lunch hour, I went to the shelter and they only had one kitten if you can believe it.  Actually, she was at least a few months old.  She was sleeping in her litter box and looked up at me with her green eyes with the same expression she still uses every once in a while today.  Also, the rare times she’s boarded, she’ll sleep in the litter box.  I think it somehow gives her a feeling of security.  I’ll bring her bed to the boarding place but she’ll still choose the litter box.  Fortunately, they always keep them clean.

I went back to the shelter the next day, Saturday, to bring her home.  As soon as she alit from the carrier, she immediately took over our home and the two resident cats.  Strangely, at some point later, she became very fearful of strangers.  We can’t pinpoint when that happened, but in her early ears she was gregarious and sociable.

She loved playing with the plastic ring on milk jugs.  She’d go to any lengths to chase them and sometimes even brought them back to me.  We’d play on the stairs.  Up and down she’d go. She was tireless, and she kept a trim figure.  Those days have long gone.  Some things that haven’t changed are her pretty green eyes and her sweetness with a dash of sass.  I love her so much.

In celebration of Lucy’s 14th Gotcha Day, let’s party!  I have all of Lucy's favorites: ham and roast beef and  vanilla ice cream and marshmallows. 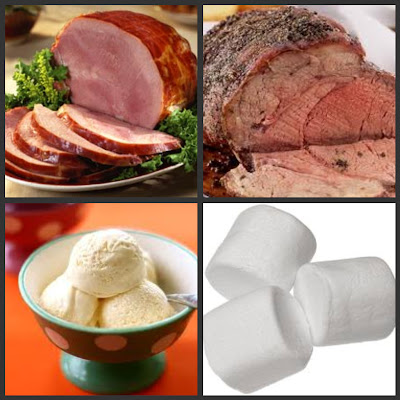 We also have party favors for when you leave.  The bones are for the doggies. 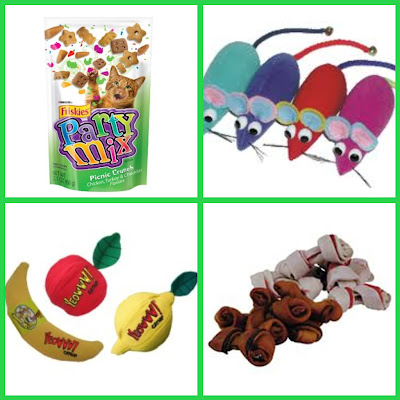 If you're a human, we have a t-shirt for you: 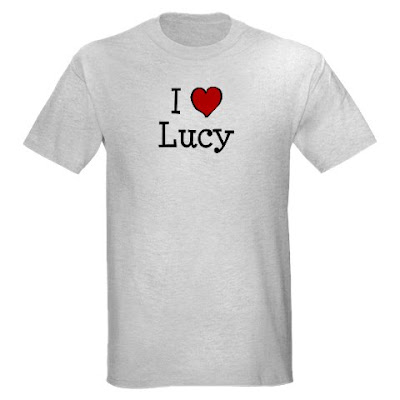 Thanks so much for coming! Stay as long as you like!
Posted by Annie Bear at 6:00 AM 34 comments:

Have you heard of a pillow garden? It's a place where you are surrounded by pillows in a gloriously unmade bed. 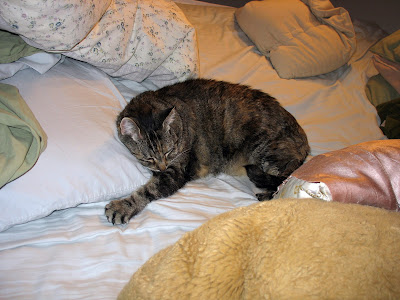 In between some rainy days, we've been having beautiful, sunny fall days.  I'm still able to enjoy my sun puddles most mornings. I like to sit on my patio and see the leaves blowing and all the colors of autumn.  Mama says my coat colors remind her of fall.

I hope you all have a wonderful weekend!
Posted by Annie Bear at 7:11 AM 22 comments:

Hooray for the Weekend

Hi Friends,
Mama wasn't able to help me blog this week. She says she doesn't have time because of work. We may only be able to blog once a week, but we’ll see.  We still visit in between from time to time. 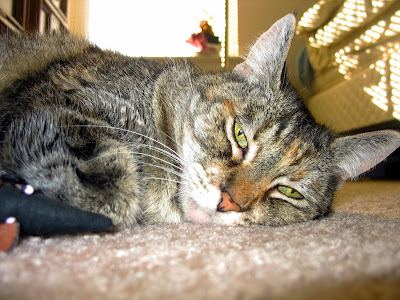 It was a rainy week (Mama took this picture of me last week when it was sunny). I’ve been sticking close to my bed and pink blankie and playing with my Morris catnip pillow and crinkle ball from King and the Kool Kittie Krew.
Mama baked twice this week.  She made pumpkin bread and sugar cookies.  My opinion of the pumpkin bread?  Ick.  Two paws down.  My judgment on the sugar cookies?  Scrumptious, but I only got a couple crumbs.
The case of the missing hairball has been solved.  I heard Papa ask Mama if she cleaned up a big ole hairball that Simba had yakked up yesterday.  She said no, she didn’t know about it.  He said when he went to clean it up, it was gone.  They couldn’t figure out where it would go to.  Apparently, it was huge.  The next day, Papa found it.  It was stuck on the bottom of his slipper, MOL!
I hope you all enjoy your weekend.  Our town is having a Market Day.  It’s an annual tradition that’s been taking place for 34 years.  They have crafts, music, artists, food and demonstrations of Colonial-era cooking.  I’d like to see a demonstration of a Colonial-era mouse roasting on an open fire, but it probably won’t happen.
Posted by Annie Bear at 7:00 AM 20 comments: